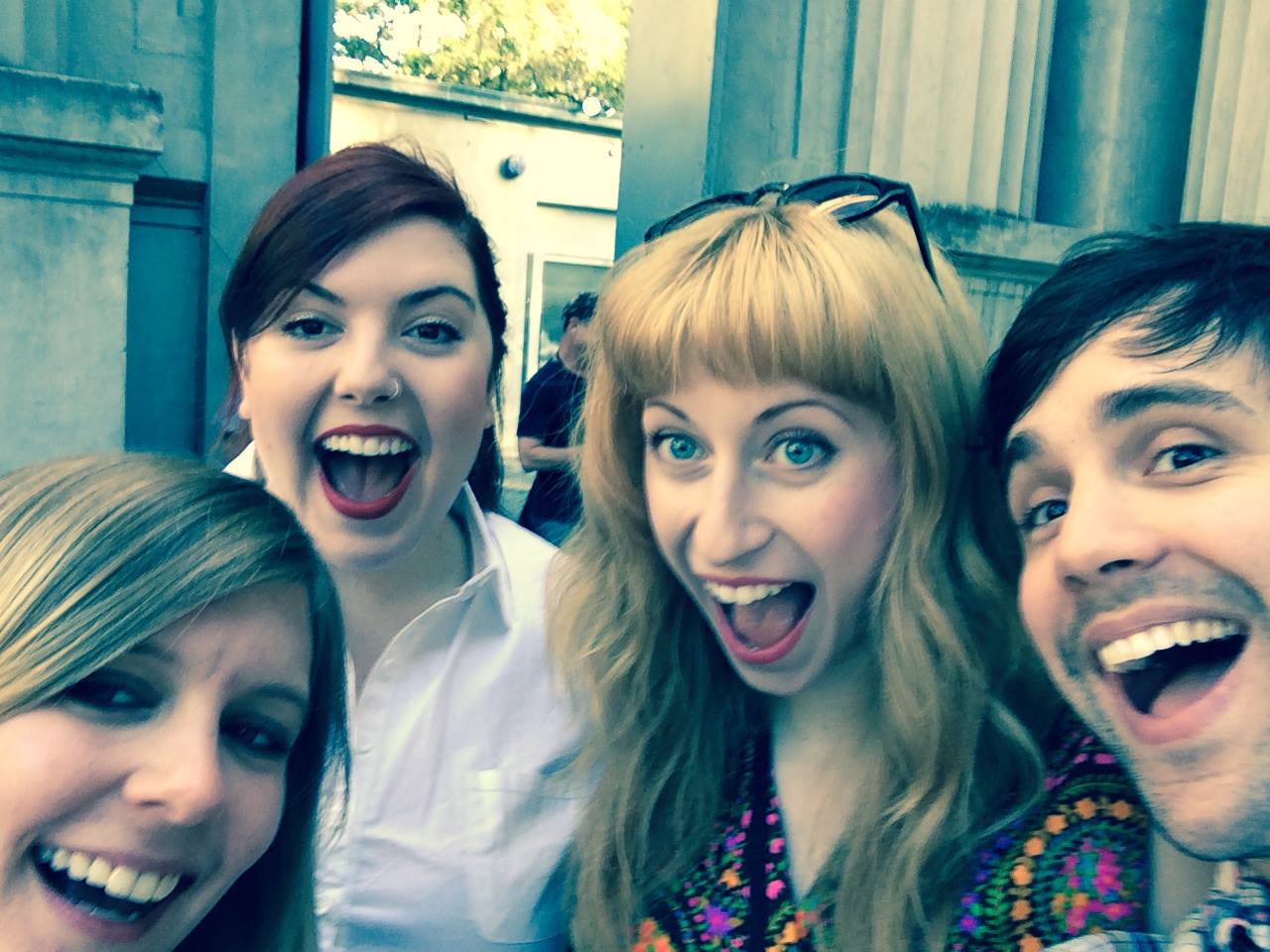 The BAND! My band is the absolute best. My whole team is the absolute best.
But I don’t think you know for real real how incredible my band is. They are ridiculously talented, kind, and a complete riot to hang out with. It should be noted that they are also total babes, and should totally do a Macy’s Christmas commercial or something.

We have finally got entertainer insurance which means I’ll be touring for the bulk of this year. SO MANY SHOWS MY GOD SO MANY SHOWS.
And you’ll see these virtuoso musicians/friends/soulmates with me along the way. Buy them beer. And buy me a hot dog. And a whiskey. And a puppy.

When I grow up, I want to be Heather Thomas. She is a fucking beast of a drummer. She’s the newest of the team, but it feels like she’s been with the crew forever. We’ve been playing shows together for about 6 months, and she is one of the funnest people to hang out with, play music with, and talk serious shit with. On tour, we call her Lone Wolf Thomas. You can too. I’ve learned so much from Heather in such a short amount of time. She is one of those people that puts things in such a wise perspective that you’re like “UGH Heather, why do you have to make me think about compassion and empathy for other people, I just wanted to run them over with my car for laughing and walking slow,” but then you’re also super grateful because she for real for real shifted your consciousness with one sentence. I can’t wait to spend more time playing music with her and learning more lessons about humanity. Heather is also a skateboarder, lead singer of her own band, hackey sack enthusiast, and former tap dancer (SHE DID A SET ONCE WHERE SHE PLAYED THE KIT AND THEN TAP DANCED BECA– USE SHE CAN DO ANYTHING BECA– USE SHE IS A GODDESS AMEN). Heather is an institution, and I can’t wait for her to take over the world.

Maiah Manser and I met in college at Cornish College of the Arts. I was instantly blown away by her songwriting and her unbelievable vocals. She is one of the kindest, most talented human beings that has ever come into my life, and she is a rare treasure to anyone that knows her. Maiah never ceases to amaze me with her insane vocals and emotional connection to her writing and voice. Maiah inspires me to be a better musician and human being. One of my favorite videos of all time is her owning the shit out of her loop system. On top of being a master of her craft, Maiah can multi-task like no other. I asked her to sing back-up. Then I asked her to play synth. Then I asked her to play bass. Then I asked her to do them all at the same time. And she nails it every fucking time. On tour, Maiah’s nickname is (sorry Maiah) Wormhole. This is due to her third eye actual psychic abilities. You may not call her that. She is one of my favorite people to tell secrets to and I feel like we’ve been friends for millions of years in so many lives. Maiah just released her first single, “Hold Your Head Up” which completely slays. She has a show (with TIM) on Sept 6th in Seattle and if you live in Seattle and don’t go, you better be having a colonoscopy or getting married or something terribly important/awful.

TIM I’M GOING TO PINCH YOUR CHEEKS ALL THE TIME

Tim is my very best friend. We met working at a restaurant in Seattle where I farted on him and we crushed on cute girls together and got drunk and cried way too often.
Tim plays every instrument you can think of. And not just half-assed. He is one of the most brilliant guitarists/bassists I’ve ever met; a true master of his craft. I sent Tim the new album (which I wrote without the band in Los Angeles) two weeks ago, and said, “Hey can you learn all of these songs in two days/program all the sounds/help design playing to track/teach me how to play them/play three instruments at once? IS THAT COOL TIM?” And Tim said, “fuck yes I will, Mary, because I’m a damn boss.” AND HE DID. Like the rest of the band, Tim’s solo writing is phenomenal. The sounds he makes with his guitar literally move me to tears.
Tim’s nickname varies. The rest of the band calls Tim, “TimTitty” I have a hard time getting those words out of my mouth, so often I just call him “Asshole” because every day is opposite day. You may not call him either of those names, though he would insist you can call him whatever you like and then give you a hug and ask you what your birthday is. He is the brooding lead singer of his band, Dark Hip Falls, a band that has been the movie music for my 5-margarita-kind-of-nights. The Summer I turned 19, Tim came to my apartment and stayed with me through the night when I wanted to kill myself. Now we get to play music together all the time. And I still fart on him.

Can’t wait for you guys to meet the rest of the crew! See you on the road!